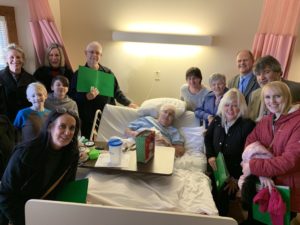 On Sunday, December 30th, the Bozo Joksimovic Choir of St. George Orthodox Church in North Canton gathered for their annual caroling event, visiting members of the community that currently reside in care facilities and nursing homes throughout Stark County.  The day began with Divine Liturgy, sung magnificently by members of the choir ages seven to seventy!

During service, the church was full, and children were abundant.  Numerous altar servers assisted Father Aleksa, including first-time server Oliver S., who travels with his parents from far-away Medina for Divine Liturgy.  This week’s Epistle was read by first-time reader, Jovana S., who spoke with beautiful clarity and appropriate volume.  All throughout, the choir led the congregation in song and response.

Following Divine Liturgy, the entire community stayed for the 40-day parastos for the newly reposed servant of God Milan Aralica, father to two of the St. George Church School teachers, and grandfather to four Church School children. The Aralica family hosted a luncheon following a visit to the cemetery for prayers.

When the afternoon had finally settled, the choir members gathered in a number of cars and visited Lucille Rogich, a matriarch of the church who offered much of her time and life to building up the church community.  In addition to the many gifts she offered, she gave one son to the priesthood, Fr. Dan Rogich, current rector of nearby Holy Trinity Greek Orthodox Church.  Lucille’s smile widened as she joined the choir in singing traditional Christmas songs, including the festal tropar, “Thy Nativity”.

The choir then visited Nellie Evans, another matriarch of the church who gave much of her life and time into the building up of the St. George community. In addition to her many gifts given over the years, she raised up a daughter who manages catering for the church, a son-in-law who takes care of repairs big-and-small, grandchildren that participate actively in the life of the church, and many beautiful great-grandchildren. Nellie was so delighted at the visit from her church family that she was almost brought to tears.  Again, the choir sang traditional songs and spent some time expressing their love and admiration.

The day concluded with a choir social that included preparation for next week’s celebration of Badnje Vece – over Lenten food and beverage, the choir members continued practicing festal music for church.

It was a beautiful day of community, family, and Christian outreach for the faithful of St. George – Glory to God for all things!