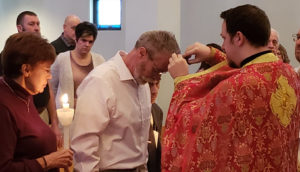 Festivities began just prior to Divine Liturgy as the community gathered early to begin the baptismal Divine Liturgy.  Prior to the Little Entrance, Lex was anointed, washed in the baptismal waters, and christmated into the Holy Orthodox Christian church.  Lex’s journey into the church began with his love of the community by joining Slava celebrations throughout the years. In the summer, he joined the parish on their pilgrimage to the holy and historical sites of Serbia where he was profoundly moved by the deep faith and  spirituality of the Orthodox faithful and monastics. Traveling with parishioners from St. George Serbian, he journeyed throughout Serbia visiting the ancient monasteries and churches, and spending time praying with and visiting the suffering and oppressed Serbian Orthodox faithful in Kosovo and Metohija.

Upon returning to the United States, Lex and his wife Paula began attending services weekly at St. George Serbian Orthodox Church – and, together, they undertook a catechetical regimen to prepare for Lex’s entrance into the Holy Church.  In close proximity to the day of his baptism, the church celebrated the great Apostle, St. Andrew the First-Called, which is now Lex’s namesake and heavenly Patron.  The entire community joyfully and prayerfully gathered around him and welcomed him into the body of Christ! 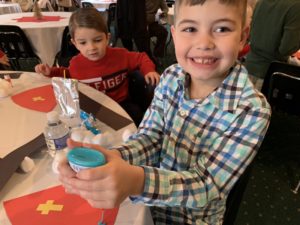 Following the Divine Liturgy, the faithful gathered in the St. George Event Center for their annual St. Nicholas celebration. This year’s program was organized by the Kochovski and Laskvoski families – two involved, faithful families in the church community.  They decorated the hall, prepared food, and put together a wonderful and education program for the children of the church.

As soon as the children arrived at the hall, they took off their shoes and lined them up against the wall, hoping that St. Nicholas might drop-off gold coins as they learned he was famous for doing. They discussed the life of the great Saint and Wonder-worker of Myra in Lycia, and completed a craft wherein they constructed beautiful hats. The program concluded with an opportunity to greet St. Nicholas himself, sit with him, and ask questions.

With support from the Circle of Serbian Sisters, all participating children received gifts as a token of love from the dedicated women of the church.  The afternoon was filled with delight, from young to old, as the children laughed and played, learned about their faith, and continued to grow the bonds of friendship that unite them to their church community – and to each other.

Glory to God for this wonderful day!