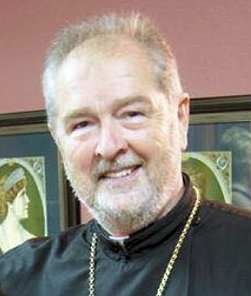 On the 40th day following the repose of the Very Reverend Protopresbyter-Stavrophor Dragan Filipovich, his community of many years, St. George in North Canton, Ohio, remembered him prayerfully.  Immediately following Divine Liturgy on Sunday, the congregation gathered around beautifully prepared koljivo and offered a pomen in song and prayer.

Fr. Aleksa Pavichevich recounted Fr. Dragan’s many contributions to the life of the Serbian Orthodox Church, particularly in his tremendous gift of education. Fr. Dragan was not only a gifted pastor and liturgical celebrant, but a teacher.  Universally, the people of St. George remember learning about the richness of their Orthodox faith from him.  Further, Fr. Dragan was a proponent for conducting services in the language of the people, and encouraged the community to use more english so that richness of the Liturgy could be understood.

Fr. Dragan, as the community remembered, also encouraged his people to a life of piety and union with Jesus Christ through more frequent reception of the sacrament of Holy Communion.  Although this was somewhat of a controversial stance at the time, Fr. Dragan encouraged the faithful to prepare and partake much more than two to four times per year.

On a personal note, Fr. Aleksa shared personal stories of Fr. Dragan, stories that had an impact on his life and his ministry.  One in particular spoke to Fr. Dragan’s directness and pastoral love.  During his first year as a priest, Fr. Aleksa was assigned to read the prayer behind the ambo during Diocesan Day at Shadeland Camp.  With knees shaking, he walked to the center of the church full of campers, faithful, and over forty ordained clergy.  With powerful lungs he read the prayer, and then went back to his place feeling that he had finally ‘made it’ as a priest, and didn’t make a fool out of of himself.  Many other clergy smiled, patted him on the back, or gave him a thumbs-up.  After service, however, Fr. Dragan sought him out immediately, put his hands on his shoulders and said… “Fr. Aleksa… that was too fast.  Slow down.  They need to understand you.”

As Fr. Aleksa recounted, his puffed up feelings were brought down to earth – but thanks-be-God, Fr. Dragan had the courage to say what needed to be said – out of his pastoral love for the church, and for Fr. Aleksa. Those words, more than many others as a young priest, helped him grow in ministry.  As Fr. Aleksa recalled, Fr. Dragan was never afraid to say hard truths – the things that needed to be said, even when people were not prepared to hear them.  Since that day, Fr. Aleksa always thinks of Fr. Dragan when he reads that prayer.

The faithful, likewise, were encouraged to remember the positive ways that Fr. Dragan had impacted this community, and each of them personally. With hope in the resurrection of Christ, the community partook of the koljivo and shared a fellowship hour remembering their former priest and pastor.

May the memory of Fr. Dragan Filipovich, parish priest at North Canton for more than thirteen years, be eternal!