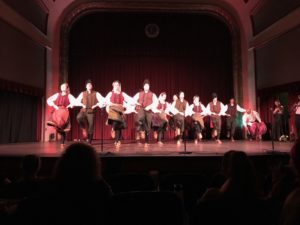 By God’s grace, St. George Serbian Orthodox Church in North Canton was once again able to host the Talija Art Company – this year in Massillon at the Lions Lincoln Theater. Over 200 people gathered in the premier, century-old grand American Theater to enjoy live Serbian dance, music, and culture. This year’s performance was themed around the 100-year anniversary of Serbian victory in World War I.

As the show began, the theater darkened as a voice offered an introduction that set the tone for the emotional production:

“At the beginning of the 20th century, Serbia was a small country of about three million inhabitants. The Karadjordjevic dynasty ruled the country after the overthrow of dynasty Obrenovic. A large number of Serbs from still imprisoned parts of the Balkans were settling down in Serbia as a free kingdom, as well as the other Slavs from Austro-Hungary who recognized the freedom and prosperity in it. The idea of liberation and unification was present, making the relations between Austria and Serbia even worse. At the beginning of 1914, Serbs lived peacefully and enjoyed prosperity but Austria was seeking the cause for aggression.”

Heartfelt renditions of “Tamo Daleko”, “March on the River Drina”, and high-energy dances from all over the Balkans were offered throughout the remainder of the evening. Historical interludes, much like the one that opened the performance, were offered periodically as the audience was walked through the tragic, difficult, and heroic struggles of the Serbian people during that harrowing time.

During the performance, a number of Serbian refugees from the Second World War were moved to tears by the strong memories and spirit that the performance evoked in them.

Guests from all over northeast Ohio came to enjoy this production, as well as many people from the local community, including schools and colleges. The director of arts and culture for Stark County was also in attendance and was so moved by the performance that immediately following the performance she spoke with the host parish representative, Fr. Aleksa Pavichevich, and Talija Art Company, about doing a production on an even grander scale during their next tour.